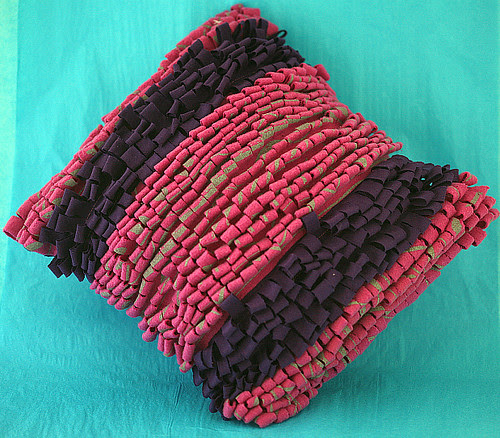 Shag Pillow, a photo by b-a-boop on Flickr.
Another handmade and upcycled present I recently made. I was inspired by a photo in a book of a denim rug I saw that was similar.

I began with two 14" squares for the front & back of the pillow, cut from a purple tee shirt.

I then cut 12" wide strips from some fleece remnants left over from a top made decades ago. I cut as many as possible from the odd shaped leftovers I had.

I roughly accordion folded the longest strip forming approximately 1" loops to estimate how wide it would end up and didn't think I had enough to cover the whole front. I then cut additional 12" strips from the purple tee shirt.

I started by centering the longest pink strip on one 14" square, leaving 1" of the purple hanging out on each side for the pillow seams. I then sewed a straight seam down the middle.

I folded over a 1" loop and sewed another seam about 1/4" from the first one. I repeated this until I didn't have enough fabric left for another loop.
Since it was knit fabric and going to be stuffed as a pillow, I just eyeballed the loops & seams, some were a bit crooked. If you wanted more precision you could measure & mark each fold & seam.

I then repeated looping the pink on the other half. I trimmed off the remainder of pink strip 1/4" away from the last seam.

I then overlapped a purple strip on top of the pink 1/2" and sewed over the same seam 1/4" from it's edge. Then I continued looping the purple in the same manner. After a few inches of purple loops, I trimmed it off and started another row of pink. As I was working with remnants, some small strips only made a few loops, so I patched pieces together as I had where the pink & purple meet.

I turned it right side out, stuffed in my pillow form & hand sewed the last edge closed.

Then it was time to make the shagging. I just took my scissors and cut the loops approximately every 1/2" (again just eyeballing it) and being careful not to cut completely down to the seams or to slice the base fabric.

And wallah! a cute shaggy pillow out of recycled materials.

Posted by Betty at 11:38 AM
Email ThisBlogThis!Share to TwitterShare to FacebookShare to Pinterest

The Reformatory is dedicated to reuse, recycling, refashioning, repurposing, upclycling, renovating, refurbishing, etc. My blog will focus most often on handmade arts and crafts and on home renovations and remodeling - using as much as possible of what you already have. I hope you find my ideas and projects informative and inspiring.

Sites to tickle your heart or mind